The Sensi Seeds website recently published an excellent interview with VOC chairman Henk Poncin. “I found out why we can’t legally smoke and my whole feeling of justice was hurt.”

The Sensi Seeds website recently published an excellent interview with VOC chairman Henk Poncin. “I found out why we can’t legally smoke and my whole feeling of justice was hurt.”

Henk Poncin: ‘It’s about spreading information, as much as we can!’

Henk Poncin (76) is one of the founding fathers of Green Prisoners Release Amsterdam. Thanks to this initiative, an American couple that fled to the Netherlands in 1994 to escape disproportional jail time for growing medicinal cannabis, received a much lower sentence. The Green Prisoners Release Amsterdam (GPRA) later became the Cannabis College; a free cannabis information centre located in Amsterdam.

In addition to this wonderful story, Henk recently had his first personal experience with the medicinal benefits of cannabis. He is using cannabis tea as a very successful painkiller after having surgery on his hip joint.

Sensi Seeds paid this remarkable man a call to hear about his medicinal experiences and to learn more about his noteworthy story as the founder of the Cannabis College Amsterdam, and as one of the initiators of the Dutch pressure group VOC. In this first part you will get to know Henk Poncin a little better, and discover what he has done for the cannabis community.

Henk, thank you for having us in your lovely home. Can you tell us who you are and how you were introduced to the cannabis scene?

“Well, I’ve been in film production all my life. And it is because of this that I got to learn about the wonderful plant. Not that I wasn’t smoking it before; I’ve smoked cannabis since I was 20, 25 years old. But at that time I didn’t know the plant how I know it now. In 1994 an American producer called and asked me to make a documentary about a festival in Amsterdam. This turned out to be one of the first High Times Cannabis Cups. So I went to this venue, and I couldn’t believe my eyes! I was introduced to a whole industry behind cannabis and all kinds of ways to use the plant. I was very impressed and realized that prohibition is a crime! I found out why we can’t legally smoke and my whole feeling of justice was hurt.”

Your feelings of justice were tested even more by the story of the Moorings. How did you get involved in that?

“Shortly after that festival I found out about the American Mooring couple when the Dutch news broadcasted an item about their extradition to the United States. They were arrested for growing medicinal cannabis in the US, facing the rest of their life in jail. The couple, Les and Cheryl, fled to the Netherlands to avoid this disproportionate punishment.
On TV they made an appeal to come together to make a stand against this. And I was like ‘Yes of course; over my dead body we are going to extradite these people!’. I’d just learned so much about the plant and all the injustice around it. So I attended this meeting. I was a bit disappointed that only a hand full of people showed up. And although there was enough drive, it was not in the same direction. So at some point I took the initiative to start up a centralized meeting point and we started to make plans to help the Moorings.”

The start of the Green Prisoners Release. What did you and the group do for the Mooring couple?

“We realized that we could only succeed if the story would get a lot of media attention. The main importance was – and still is – information! If all the people know what I know, we wouldn’t have this problem. And I knew just a little at that time, but it was already enough to know that this extradition was insane. We managed to get some attention by sending letters to the press and the Minister of Justice.”

What was the biggest success of the GPRA?

“Our biggest achievement came after the Dutch high court ruled on the case. Directly after the rule we sent a petition to the Dutch Minister of Justice, Winnie Sorgdrager, signed by 60 very famous Dutch people. After this, all of a sudden, it became huge in the national news.”

And the case gained momentum after this?

“Yes. After the success of the petition, Sorgdrager was more or less forced to take action. She went to the United States to meet her counterpart Janet Reno. In the end they agreed on extradition to the US if Les and Cheryl Mooring were punished according to Dutch standards. This meant an almost immediate release for Cheryl and 10 years for Les instead of 30, minus time spent on remand.”

They were both facing a much longer time in jail, so this is fantastic! How do you feel about the results?

“I am not disappointed. Something came out of all the work. And because of all this we knew we had to stay on the subject. To be honest I am very happy that this story became part of my life; I feel proud that I was part of it! Especially now, when things are changing for the better on a global scale.”

“No, unfortunately not. This whole story did their marriage no good. They split up. Les and I exchanged letters when he was in prison, but since he is out, the contact is diluted.”

How did you manage to combine the GPRA with your work in the film industry?

“Well, I stopped working. I saved some money that could serve me for a while, so I decided to stop, to be able to focus on the GPRA and later the Cannabis College. And to be honest, I never went back to the film industry [laughs].”

The GPRA later became the Cannabis College. How did that evolve?

“Many people came to the GPRA for help after the Moorings, but it was impossible to help them all. But I did realize that spreading and distributing information is a way to finally get this thing [cannabis prohibition, ed.] over with. It is all about a lack of knowledge.

This realization created the Cannabis College: a free information centre for the general public in the heart of Amsterdam, open seven days per week. I am very happy to say that with the help of so many people it is still there today and it is looking better all the time.”

Henk Poncin and the VOC 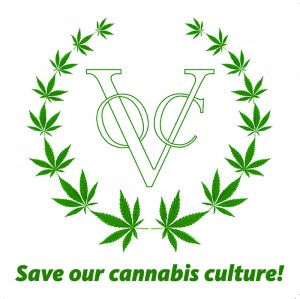 The VOC stands for Verbond voor Opheffing van het Cannabisverbod, which means the Union for the Abolition of Cannabis Prohibition. This Dutch pressure group is working hard to assemble as many concerned parties as possible by organising, for example, several monthly meetings, organising Cannabis Liberation Day, and lobbying the government.

The name links to that of the Vereenigde Oostindische Compagnie or VOC (literally United East India Company, referred to in English as the Dutch East India Company), the Dutch trading company founded in the year 1602. This VOC could not have existed without the use of hemp, which was needed to build their ships, as well as power them in the form of sails. A former Dutch Prime Minister also used the words ‘VOC mentality’ in 2006 in order to stimulate a positive work flow in the parliament. The name of the VOC pressure group invokes these two events.

What is keeping you busy nowadays?

“Well, after the Cannabis College was founded, the movement started to grow and out of that a group of people created the VOC. At the moment I am the chairman of this pressure group.”

How did that evolve?

“After the opening ceremony of Ben Dronkers’ Hemp Gallery, Ben and I had a chat and talked about the continuity of the College and how we could create a discussion platform. Out of this idea we started the Cannabis Tribunal; recurring meetings with scientists, activists, entrepreneurs and politicians about the prohibition of cannabis.

This was basically the start of what turned out to be the VOC. The VOC is a rather successful pressure group. We have contact with the government, we publish brochures, for example on this crazy 15% THC measure. We also organize the annual Cannabis Liberation Day. Once per year we publish the Bidbook; a book with an update on the current situation which we send to all the members of Parliament. And they quote from this so we know it works.”

What is your relationship to Ben Dronkers?

“To start a free information centre, to run it, including a staff, to make it look decent – that is not easy. In the beginning we worked with sponsors and good-hearted people who stayed with us for a month or two, but we needed something substantial. And then all of a sudden a friend called Eddie, the former owner of [cannabis] seed shop the Flying Dutchman, connected us with Ben Dronkers and from that moment most of our worries were over. I am utterly grateful for the help of Ben, he is a hero of this time for many reasons!”

“Yes that is correct! Spreading information about our beloved plant as much as we can!”